Home » Articles » Historical article » The Story Behind The Queen’s Rival

The story behind Cecily Neville, the mother of Edward IV and Richard III in Anne O'Brien's new novel. 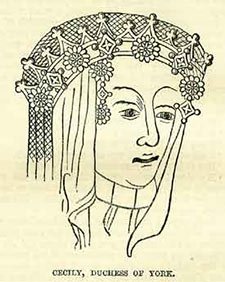 The story behind Cecily Neville, the mother of Edward IV and Richard III in Anne O'Brien's new novel.

The objective of an academic historian, I would suggest (although I am willing to be argued down) is to research a subject from all available sources and report the findings to provide an acceptable cause/consequence scenario based on the evidence to hand. The more interesting the better.

Writing historical fiction, particularly about people who actually lived, presents a quite different task. Yes, it must inform the reader, but it must also entertain. What a marvellous source history provides for the writer of novels. Intriguing stories to stay in the mind.  Characters to love or hate. Relationships that are more complex than anything in the soaps. Scandals, treachery, bloody battles and appalling death through disease; all page-turning excitement in fact. Many readers who enjoy history would rarely pick up an academic book but will happily spend hours in a novel and be willing to learn from it. Where does the reader discover more about characters who lived six hundred years ago, who may only be a footnote in an academic treatise? The answer can be through the pages of historical fiction.  And in my recent novel, The Queen’s Rival, the story of Cecily Neville emerges against the backdrop of the Wars of the Roses.

But herein lies a problem; historical fiction has been damned as a lesser talent, a repository for unnecessary emotion, inaccuracy and a fair sprinkling of anachronisms. Some years ago, when I was completing my novel on Joanna of Navarre, not one of our most well-known English queens, Dr David Starkey infamously stated: ‘We really should stop taking historical novelists seriously as historians. The idea that they have authority is ludicrous.’ Similarly, Niall Ferguson, in his well-publicised exchange with the novelist Jane Smiley, argued that historians are ‘not allowed to just make it up’, implying that historical novelists do exactly that: ‘make stuff up’.

It is not possible to just sit down and dash off an historical novel based on a life or event from the distant past. Research is essential. Evidence must support the whole of the historical story. What happened in the pages of history cannot be discounted, ignored or not investigated simply because it does not fit well with a perceived plot in the mind of the novelist. Otherwise, the writing becomes simply fiction or even fantasy. Why not throw in a few dragons as well, which many readers might like? Accurate research is for me the bedrock of my writing.

Yet, the end result is not a ‘history book’. It is a novel and so needs an excitement; a compulsion to reach the end. It must offer more than the facts, and what facts there are must be balanced between the politics, wars and court life, and the story of the people involved. What happened is important but, so too, is the emotion that inspires the characters.

Here a different skill is called for, and an often heart-breaking one to apply. Much of the hard-won research must be wilfully jettisoned to create this fine balance. Too much ‘history’ can be the death-blow to the sheer joy of a novel, destroying any drama by weight of detail that drags the pace and crushes the clash of temperament. The danger of too much overload is very real. An event might be interesting but is it relevant to the story? Does it fire the plot and the pace to keep the reader engaged? Three pages on how to fire a long-bow at the Battle of Wakefield where the Duke of York was killed, might interest me but it does not fit the bill for pursuing the story.

This can be a particular hazard in writing about the Wars of the Roses. The problem is that the scope of the wars is vast; as the life of Cecily Neville is complex in the range of family connections. A formidable woman; she lived for eighty years, experiencing five reigns, interacting with the famous, infamous and influential characters through the tumult of the Wars of the Roses. From all of this, Cecily Neville must step out of the past, sit beside the reader and keep them in good company. She was a wife, a sister, an aunt; a woman of some political influence, not just a character of some historical notoriety kept between the pages of a history book.

A simple decision but often a vital one – though maybe not simple at all, since the beginning is crucial for keeping the reader’s interest – is where to start writing the novel. Where would I begin to write my story of Cecily Neville, Duchess of York? I chose the events of October 1459 in the town of Ludlow, the Yorkist fortress in the Welsh Marches. Why choose this place and time? By now Cecily was forty-four years old. She had been married to Richard Duke of York, for thirty years, spending time travelling between England and France, living in Rouen and Dublin, while Richard was on campaign. She had given birth to all twelve of her children by this date, and had watched five of them die prematurely. She had already experienced the political dangers of the day, with a weak King Henry VI allowing the battle for power between the great magnates.

Why then, with so much going on in her earlier life, choose Ludlow in 1459 to begin the story? It was on this was the occasion that Cecily stepped out from the shadow of her family, both Nevilles and Plantagenets, and made an impact on history. It was not her choice to do so. Circumstances forced her into it. But what a dramatic event it was to capture the imagination of the reader, and it was from this point Cecily remained one of the movers and shakers.

What about characters who are significant and fascinating but have no bearing on the plot?  There is a vast array of characters who, although essential to the outcome of the Wars of the Roses, had little direct impact on Cecily’s life during the years of The Queen’s Rival. They must be dealt with rigorously, and without apology. Margaret Beaufort and Henry Tudor are dispatched to the periphery, and Cecily’s many brothers and sisters are, for the most part, ignored. There will be another time and place for them.

Whilst the Wars of the Roses was a clash of ambition between powerful adversaries to take the English crown, it was also a strong story about family; the joys, the heartaches, and the tragedies of intimate family life. It is for this that I would like readers to enjoy the very personal nature of it, within the cut and thrust of bloody politics. The history is there but as a background, simmering gently.

When asking what is it that turns history into a good story, the answer is the imagination of the writer. It has to remain historical fiction, so how far can we stretch historical license? It must be informed imagination. Cecily Neville must react to events as we would expect her to react, or even, startlingly, excitingly, as we would not expect if history points in that direction. We must rejoice and suffer with her through both happiness and tragedy.  Conversation is a crucial element, telling you all you need to know about the characters and relationships. Since such exchanges are rarely recorded, they are to be constructed by the writer. As Hilary Mantel observed in a recent article: ‘You are working with what isn’t on the record and never could be, so you can never claim to be accurate, but you can aim to be plausible.’ Perhaps one of the best possible definitions of historical fiction.

Whilst the ‘whodunnit’ can be a very important aspect of fiction, in historical fiction the party responsible has already been revealed, which robs the writer of the basic weapon to provide an outcome that satisfies. Historical fiction takes the reader on a journey that may be well-known. We know who dies, who rejoices, who emerges victorious. So how to make it interesting? Tension and excitement are hooks to draw the reader into the drama and vivid colour. The reader must be there. The story must come to life so that the reader must know how it is resolved – since it is already known that it will be resolved.

History rarely tells us the day to day of our characters’ lives. Here is the opportunity to introduce the colour of the period in which they lived. Cecily and her family did more than fight and stitch altar cloths. They enjoyed music, books, dancing and hunting. They worshipped, got married and buried their dead. They told jokes and lost their temper. This is how they spent their time and so this must be part of the novel, even if it is not on record that there was a falling out over trivial domestic incidents.

A further layer is essential, for our medieval woman existed in a three-dimensional world.  Her ‘skeleton’ demands to be clothed with flesh and garments and appropriate jewels. She must be given an ‘appearance’ since contemporary images are rare and descriptions unreliable. A novel gives the opportunity to witness the family and social setting. But take care of the language, for I am no supporter of ‘gadzooks history’. It must be modern and authentic with no anachronisms and no modern slang. Take care they do not have knowledge that would not be theirs, such as countries, foods and cures not yet known.

Finally, the research is done, the facts closely honed, and the characters developed. At last, through The Queen’s Rival, Cecily Neville emerges from the morass of facts behind the Wars of the Roses and becomes a real person, as her family become real. The Duchess of York can never again be swept behind the arras of history. She displays her talents and preferences, even for cooking fish, and steps out of the pages and into the company of the reader.