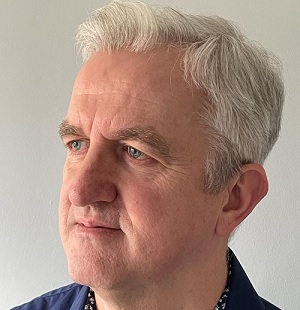 Alistair Tosh was born in Dumfriesshire, a place filled with ancient place names such as Torthorwald and Caerlaverock. But it was his visits, as a boy, to nearby Burnswark Iron Age hillfort and its Roman siegeworks that first fired his interest in Roman and Dark Ages history.

On leaving school he began a 35 year communications career, firstly with the Royal Navy, that included covert riverine and seaborne operations during the height of ‘The Troubles’ in Northern Ireland, before moving as a civilian into the corporate telecommunications world. Military life is unique, and Alistair aims to reflect an authentic view of that experience and its language in his stories.

His debut historical novel, Siege, the first book in the Edge of Empire series, is set against the backdrop of the Antonine push into Caledonia. Lucius Faenius Felix cheated of his ancestral estates and still grieving the murder of his father, arrives in Britannia as an inexperienced Tribune to command the First Nervana. A cohort drawn from the homelands of the fierce Nervii tribe. With the comradeship of Cai Martis, the veteran cavalry Prefect, he endeavours to uncover the conspiracy of the resurgent Novantae people.

“An excellent, exciting debut. Gripping, gritty, and blood-spattered. Fans of Roman historical adventure will love it! Alistair Tosh is a writer to watch.” Matthew Harffy, Author of the Bernicia Chronicles. 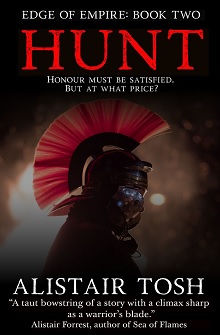 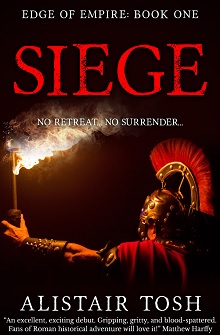 The Roman army waged war in the most brutal of fashions. Its aim was the total subjugation of its enemies. Well, so far, so obvious. What is perhaps less understood is the way it valued fear itself as a weapon. Ably illustrated by the tactical use of projectile weapons in a siege.When we imagine a Roman siege, Caesar’s great circumvallation of Alesia and the defeat of Vercingetorix may ...
Read More
The original vision for my Edge of Empire series of novels was to write stories that focussed on the lives and adventures of two protagonists from a single Roman auxiliary infantry unit. It was to be set in the north of the province of Britannia and in the wilder, unconquered lands beyond its boundaries. But as I buried myself in the research ...
Read More
In 2005 a dramatic discovery was made in Lancaster, northwest England, of a massive stone bearing the image of a triumphant horseman and his fallen foe. Of itself this is not surprising given that it is known that there were cavalry units based at the nearby Roman fort throughout the centuries of its existence.Several such monuments have been found in the former province of Britannia (8 ...
Read More
At some point around AD 155 the Roman fort of Blatobulgium was destroyed.The Roman army when abandoning one of its castra would, as a matter of good military practice and in an orderly manner, demolish the defences in order to deny them to the enemy. However, this does not appear to be the case in regards to Blatobulgium (Birrens, near Ecclefechan, southwest Scotland). Archaeologist Anne ...
Read More

Alistair Tosh, what prompted you to choose the period that you wrote your first book in? I have always been fascinated by the ancient history of southwest Scotland and northern England. Much of it is only written in the landscape rather than in any document. Burnswark Iron Age hillfort is a
Read More

Siege: Edge of Empire is Alistair Tosh’s debut, and the novel does not disappoint. Packed with explosive dialogue and demonstrating the claustrophobia of battle, Tosh has created the first title in what promises to be a thrilling series.Firstly, we meet Lucius Faenius Felix, commander of the First Nervana, and ...
Read More