Praetorian: Blades of Antioch, by S.J.A.Turney

S.J.A.Turney's latest Praetorian is reviewed by us.

In the sixth instalment of his Praetorian series, Simon Turney once again delivers an exciting story of intrigue, military drama and messy Roman politics. With Blades of Antioch, he shows he is not only a master of his craft, but of portraying the Roman world in all its complicated glory. His understanding of historical attitudes, environments and context is, quite frankly, excellent. Not only does he know how to utilise the sources to create realistic and plausible narratives, but he is able to go beyond them to the experiences that they imply. His empire is vibrant and functional, breathing life into the bald facts that make up our understanding of the imperial Roman world.

The decision to place this narrative within the tumultuous Year of the Five Emperors (AD193) is a smart one, providing a dramatic political and military crisis for Rufinus to again become embroiled in. Indeed, this book sees our hero, who by this point is a family man seasoned if not perfected by all he’s seen and done, aiding the frumentarii on one last mission. In the East, where civil war is raging between two would be emperors (Rufinus’ master Septimius Severus and the ‘usurper’ Niger), a grain man has disappeared, and with him a list of all the agents working for Severus in the region. Ordered not to let this list fall into enemy hands, Rufinus must travel through the farthest reaches of the empire to recover it. Where there is civil strife, however, there is also treachery and betrayal, and before long Rufinus realises that the empire is in more peril than he could ever have imagined.

Turney’s exploration of the eastern edges of the Roman Empire is fascinating. Taking us through Egypt, across Arabia and up the Levantine coast, we discover just how vast and varied it truly was. Described in gorgeous detail, a rich landscape emerges, one which is as culturally diverse as it is geographically broad. Indeed, a highlight of this book is its exploration of ancient Judaism through the character of Ioses. The multiplicity of identity within the Roman Empire is one of its most interesting aspects, and the tension between the Romans and the Judeans adds a layer of complexity to not only this story, but to the world Turney is building within the series.

More than this, the novel overall is highly enjoyable. Despite this being the sixth book, the series has lost none of its freshness. Turney is an expert at seamlessly upping the stakes and drawing the reader through ever more tense encounters. The weaving of different narratives, the twists and turns that he plots so methodically, and his ability to resolve larger plotlines without clunking up the pace is decidedly impressive. The characters remain central and real, Rufinus’ task becoming ever murkier as his path entwines with characters old and new. Neither does Turney skimp on the action; Rufinus and co. are thumping as many heads here as they ever were. Pulse-pounding fights, chase scenes and acts of revenge abound.

Blades of Antioch takes the reader on a journey which is at once comfortingly familiar and refreshingly new. Fans of the series, or of historical fiction of this type, will not be disappointed, while anyone who loves the ancient world will relish in the little details (the description of Petra’s water system is particularly satisfying). I myself can’t wait to see what comes next.

Praetorian: Blades of Antioch by S.J.A.Turney is the latest of his Praetorian series. 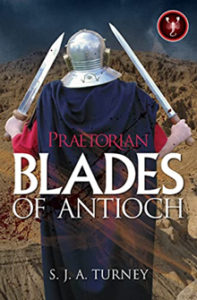 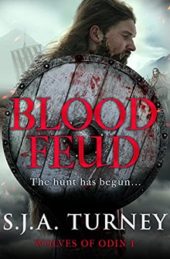 The Last Viking, by Don Hollway 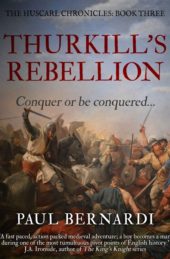