Wars of the Roses Myth: Was Richard Neville, Earl of Warwick, really a ‘Kingmaker’? 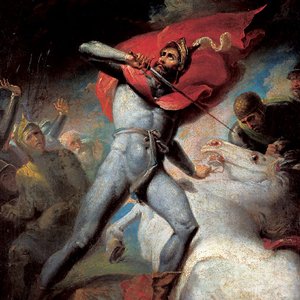 Warwick's Alleged Vow Prior to the Battle of Towton.
Home » Articles » Wars of the Roses Myth: Was Richard Neville, Earl of Warwick, really a ‘Kingmaker’?

I have had a bit of a rant on Facebook about the common myths which persist about many aspects of the Wars of the Roses period. I vowed to do something about it, so here’s my second offering which seeks to explode the myth that Richard Neville, Earl of Warwick, justified the epithet of “kingmaker”.

History likes important people to have nicknames: Alfred the Great, Ethelred the Unready, William the Conqueror, Edward ‘Longshanks’, or the ‘Hammer of the Scots’, ‘Good Queen Bess’ or ‘Gloriana’, ‘Bloody’ Mary and ‘Bluff’ King Hal. Such nicknames will be familiar but these names are not about history, they are about legend. They are useful handles for us to use to identify a particular figure and they have become part of our collective memory. Unfortunately, they are often wholly, or partly, inaccurate – and frequently based upon the opinions of a few influential early historians.

These nicknames are thus the judgement of one society or culture upon another that came before – and they sometimes come with a fierce perspective! Often it’s worth finding out, if you can, who first used the term and why.

So when was the name ‘Kingmaker’ first used about the Earl of Warwick?

Well, Shakespeare – who else? – gives us a place to start with the character of Warwick in his play Henry VI Part 3. [Please note: Shakespeare wrote fiction!]

In Act 2, scene 3, Warwick is described by the bard as: “thou setter up and plucker down of kings.”

But the term ‘kingmaker’ actually predates Shakespeare. A Scottish philosopher and intellectual, John Major (or Mair), wrote in 1521 of Warwick in his History of Greater Britain: ‘Of him, it was said that he made kings and at his pleasure cast them down’ and Major used the Latin phrase ‘regum creator’ to describe the earl.

The first known English reference is: ‘That brave Kingmaker, Warwick’ which appears in Samuel Daniel’s poem, The History of the Civil War written in the reign of Elizabeth I.

However, it was not a term in common use for several hundred years until the eighteenth century historian, David Hume, made it more well-known. And of course, for good or ill, the epithet stuck fast.

I have no trouble with using such a tag as an easy handle for recognition purposes. People mostly have some clue to whom you are referring if you say Warwick, the ‘Kingmaker’, to distinguish him from all other Earls of Warwick that existed before or since – and there have been many! That’s fair enough, but when it comes to whether the term is justified, then that’s another matter entirely.

There are probably three distinct occasions when it has been claimed that the Earl of Warwick was a kingmaker:

Like most things in the Wars of the Roses, these claims are controversial, but the short answer is that Warwick didn’t actually make anyone king!

In Part 1, I shall deal with the myth that he intended to replace Henry VI with Richard, Duke of York.

Just how powerful and influential was Warwick?

Warwick had immense wealth – he was a ‘billionaire’ for his time by virtue of his massive land holdings which were the fruits of a succession of advantageous Neville marriages. His large family had intermarried with many other noble families and he could thus build alliances to gain the support of other powerful men.

His wealth gave him a sizeable retinue of men at arms, archers, etc. from these vast estates. He was keen to use the latest technology in warfare such as cannons and firearms – and he understood the importance of such new weapons. In the field he was a courageous warrior, capable of inspiring great loyalty amongst his supporters. Unlike many, he understood the value of sea power and was something of a pioneer in its use.

As well as his martial prowess, he had the charm of a smooth-talking diplomat who was able to win many to his banner. Add to that the drive and ruthless determination to succeed and you have a man capable of achieving a great deal.

The historian, Michael Hicks, in his recent authoritative book, Warwick the Kingmaker, concludes: “For twenty years he shaped events, his own career, and indeed history itself.”

So Warwick probably had the means to ‘make’ a king, but did he try to put the Duke of  York on  the throne?

The Duke of York possessed an ancient claim to the throne and he was, in the absence of an heir to Henry VI up to 1453, the heir presumptive – the man most likely to succeed. Nevertheless in the early 1450s Richard of York felt slighted and ill-treated, perhaps with some justification, by Henry VI’s regime. York ended up with almost no major political allies. Then, during the period 1452 to 1455, he began to form an alliance with the powerful Neville family.

Was the alliance with York the work of Warwick?

Perhaps, but only in part, since his father, the ageing Earl of Salisbury, whose sister, Cicely Neville, was married to York, was the true architect, just as he was the architect of the marriage years earlier that gave Warwick himself such wealth.

How then did Warwick come to support Richard of York against King Henry VI?

Warwick believed that, as a key figure in the realm, he should position himself and his family as close to the centre of power as possible. Since the source of all patronage and advancement was the king, Warwick expected to serve the king in a major capacity and be amply rewarded for doing so. Nothing unusual about that since it was the aspiration of most noblemen in England.

Unfortunately for Warwick, he, and the Neville family in general, had influential rivals at court, notably Edmund Beaufort, Duke of Somerset. They were also embroiled in a bitter feud with the Percy family in their own backyard in the north of England. The usual way to eclipse one’s enemies was to harness more power and wealth from the king, for example: grants of more land, appointment to important offices of state or lucrative customs contracts. Such things were the bread and butter of all noble families at that time. The problem was that there was only so much largesse that a king had to give. A prudent king might spread it around a little to create some balance amongst his most powerful subjects, but sadly, Henry VI was not so discriminating.

Thus, by the mid-1450s, the Earl of Warwick, despite all his power and wealth, did not have the pre-eminent position in the state that he coveted. But on two occasions in the 1450s, Warwick was given a glimpse of an alternative reality – a world where England was ruled by a Protector of the Realm because of the king’s temporary incapacity. That protector was Richard, Duke of York and York did a fair job of ruling. He also rewarded his friends, such as the Nevilles, and punished his enemies, such as Edmund Beaufort, Duke of Somerset.

York gave Warwick the prominent seat at the table of state which he wanted. But, after the king’s recovery, York had to relinquish his role of protector with the result that the York-Neville faction was once again starved of influence over the king and thus out of power. For a time they tried persuasion but then in 1455, at the first Battle of St Albans, they resorted to force.

So, was St Albans in 1455 the first act of the ‘kingmaker’ to replace Henry VI?

Definitely not and any such suggestion is pure fantasy. What Warwick wanted to do in 1455 was forcibly remove the king’s closest advisers such as Somerset. It was no surprise that the chief casualties at St Albans were the leading noblemen against York and Warwick: dead men can’t rule.

York and Warwick also wanted to limit the influence of the Queen, Margaret of Anjou, who was fiercely supportive of her husband and wanted to protect the legacy of her recently born male heir.

But St. Albans was a dangerous gamble that sent shock waves through the English nobility. Because some prominent men were killed, several new and bitter feuds were started which would last for decades. The use of violence was condemned by many, and if York was testing the strength of commitment to Henry VI, he found that, despite his brief and bloody victory, the vast majority of nobles and others saw Henry VI as their lawful king, anointed by God and thus to be obeyed.

Even York’s own supporters, including the Earl of Warwick, accepted that this was so.

When in 1460, York aimed for the throne, Warwick seemed as surprised as most other lords – few of whom showed any enthusiasm for the idea. The best they would accept was the so-called Act of Accord, whereby Henry would live out his life as king but then York would succeed him.

If Warwick played any part at all in this whole episode it was a conciliatory one.

After all, it did not help Warwick’s aim of political power to become embroiled in a bloody civil war, the outcome of which was by no means certain. A desperate man might do that but Warwick was not so desperate – at least not yet…

Nevertheless, the Act of Accord disinherited the king’s legitimate male offspring and Queen Margaret, for one, was unlikely ever to accept that. Her opposition to York and the Nevilles, once born out of suspicion about their motives, became implacable enmity. And she was not going to give up. Marshalling the loyal nobles, who were still the overwhelming majority, she conjured up, at the Battle of Wakefield in late December 1460, the one thing which could put an end to the struggle: the deaths of both Richard, Duke of York and Richard Neville, Earl of Salisbury – Warwick’s father.

Warwick had never intended Richard, Duke of York, to actually take the throne from Henry VI, yet the would-be king and Warwick’s father were now dead and, as a result, the York-Neville alliance lay in tatters. York’s death was a body blow because Warwick had invested so much in the duke’s political success. Not only was Warwick out of power, but he was now at risk of losing everything he had.

Thus early in 1461, Warwick had to decide how he would deal with the fallout from the disaster at Wakefield. But that’s the second part of the myth – and a whole other story… 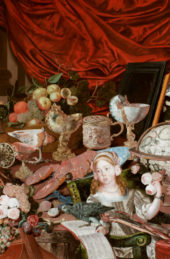 How to Divide a Family: Make a Will 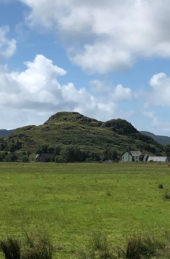 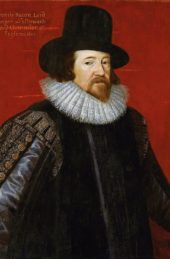 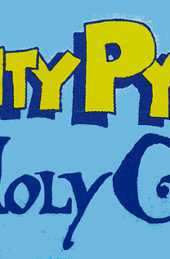 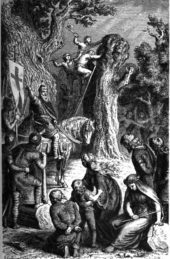