A very long time ago, when I started working as a reporter for NBC News in the US, a veteran colleague spotted my general cluelessness. He kindly took me aside and gave me this nugget of golden advice: ‘There are only three reactions you want in the viewer watching one of your reports: Hey, that’s me; Hey, I wish that was me; and Hey, I’m glad that’s not me.’ Genius.

As with newsgathering, so with History. For me, the study of the past has mainly been about people-watching. Of particular interest, I find, is how we fallible, fragile, human beings react in the face of glory and defeat, triumph and tragedy. It’s important to engage with the reality of the past, and to try to make that engagement immersive. I find I can only connect with the great moments in history if I can empathise with them. That is what leads me to the tales I tackle when I settle down to write a new book; I tend to veer towards exultation and heartbreak.

My historical beat till recently was the Stuarts. My three previous books were on the Civil Wars of the mid-17th century. But, in most recently writing about the White Ship, I have been transported back a further half a millennium to a uniquely catastrophic loss at sea – one that led to quite extraordinary bloodshed on land. Again, England suffered a ghastly civil war, with a dramatic change in direction for the kingdom. Unlike the conflicts between Charles I and his family against Parliament, this did not result in a return to power by the ruling family. Indeed, it placed a firm full stop on a short-lived dynasty.

Nine centuries ago, Henry I sat on the English throne, while also ruling the dukedom of Normandy. The fourth son of William the Conqueror, Henry had spent his youth seemingly destined for a life of highborn obscurity. It appears quite possible that the pious Conqueror initially earmarked him for the Church. This would help to explain Henry’s literacy, which was remarked on at the time, and reflected in his bookish nickname of Henry ‘Beauclerc’.

Many underestimated the junior prince in the royal family. Henry appeared to be of limited ambition: he was observed as being happiest in the hunting field. This was a sporting arena that the Conqueror particularly adored, being where horsemanship and bravery were shown off and prized. In his new prize of England, he dramatically enlarged the woodlands reserved for royal hunting parties, clearing settlements and mutilating those caught poaching his precious game.

But hunting was a dangerous pursuit; two of Henry’s elder brothers and one of his nephews would perish in the New Forest. The last of the trio to meet his end this way was William Rufus. The Conqueror’s favourite son, Rufus had succeeded to the English throne in 1087. 13 years later, Rufus was hit square in the chest by an arrow which seemed to have bounced off the flank of a deer. It took the king’s life before he could utter a word – a fitting end, many thought, for a man famed for his assaults on the Church and its great wealth; deprived of confession by the fatal arrow, Rufus’ eternal damnation seemed guaranteed.

Henry used the opportunity presented by the fatal arrow to emerge from the shadows. While rigor mortis began to set in, Henry rode as fast as he could for Winchester, where he took control of the royal treasury. Quickly moving on to London, he was crowned in Westminster Abbey – before the Conqueror’s eldest son, Robert Curthose, knew that the Crown that was meant to be his was even in play.

Curthose was returning from the First Crusade in triumph when the startling news of Rufus’ death and Henry’s coronation reached him. Curthose soon set about invading England with a large army. But Henry’s fledgling rule crucially had the support of the Church. Anselm, the saintly Archbishop of Canterbury, urged all good Christians to support their anointed king. Meanwhile, the Anglo-Norman aristocracy demanded peace from the warring brothers; these lords and their knights had no intention of laying down their lives, or of risking their estates, in a messy fraternal conflict. Henry had to agree to pay large sums to Robert, and in return Robert crossed the Channel for his dukedom of Normandy.

Robert Curthose at the Siege of Acre

Henry had bought himself breathing space, but if he was to guarantee his dynastic hold over England, he needed a male heir. Early in his reign he married Matilda of Scotland, a princess who, via her mother, possessed the blood of English kings: Alfred the Great was her direct ancestor. Chroniclers noted that the couple were in love with one another, but this was a strategically fine match, joining the blood of Norman conquerors with the Anglo-Saxon crown.

Matilda was a considerable figure in her own right, building up an independent court where literary patronage and devout Christianity flourished. She encouraged the writing of William of Malmesbury, one of the great historians of England. She also founded a hospital for lepers, where she was seen to bind and kiss the lesions of the afflicted. Matilda was an innovator, too, building bridges around London that exist today, and she even introduced the first public lavatories to the capital.

Matilda’s prime duty was achieved in 1103. Having already given birth to a daughter (another in a dizzying number of royal Matildas at this time), she now produced William. He was known as William Ætheling, an Anglo-Saxon courtesy title denoting the right to succeed to his father’s rule.

It seems that, with this dynastic duty done, Matilda lived separately from her husband, choosing a life of celibacy and religious devotion. Henry was of a different inclination. He had long had a bevy of mistresses and he returned to his affairs with gusto. He fathered at least 22 natural children.

While William the Conqueror had become Duke of Normandy when known to be illegitimate, this was not to happen again. The Church had clawed back power and influence in Normandy and England since the 1070s and marriage was now seen as a cornerstone of society, as well as an essential precursor to inheritance.

All Henry’s hopes and plans were therefore bound up in William Ætheling. The prince seems to have been brought up by the king, accompanying him in warfare and diplomacy. William was present in the key campaign of 1119, when Henry fought against his long-time enemy, Louis VI of France. This seemed to reach its successful conclusion that summer, with Henry’s great victory at Brémule. Utterly defeated, Louis was obliged to recognise William as the designated Duke of Normandy.

In late November 1120, Henry and his vast entourage arrived in Barfleur, the harbour east of Cherbourg that was the main departure point from Normandy to England at this time; a voyage from Barfleur to Southampton would take ten or 12 hours with a favourable wind.

A captain called Thomas FitzStephen now stepped forward and introduced himself to Henry as the son of the skipper of the Conqueror’s flagship, the Mora, in 1066. He demanded the honour of transporting Henry back in his moment of triumph over the French in the White Ship; a splendid, lime-washed vessel with 50 experienced oarsmen.

Henry, a man who was set in his ways, declined the offer. But he suggested that his son and heir, other of his illegitimate children, along with various relations, as well as leading statesmen, churchmen and bureaucrats, should take the opportunity to enjoy a trip north on the White Ship.

The king set off in his royal vessel early that evening. The teenaged prince and his entourage, however, were in no hurry. They lingered in port, getting drunk on three massive caskets of wine that they shared with the crew.

By the time the White Ship took to sea, the majority of those on board were much the worse for wear, including the helmsman. The cry went up to try to overtake the king’s vessel, and the oarsmen bent their backs in an attempt to please the prince and his baying entourage. The sail, which should only have been deployed once the White Ship was clear of the rocky coast, was dropped prematurely. The voyage was chaotic from the start and proceeded at dangerous speed.

About a mile northeast of Barfleur, disaster struck. The ship rammed into a well-known hazard, the Quillebœuf Rock. When the crew tried to push the White Ship free, they succeeded only in tearing the gash in her side wider still. Those on board began to cascade into the freezing sea, screaming in a panic that was heard ashore, but was mistaken for yet more revelry onboard.

We are lucky that there was a survivor. He was Berold, a butcher from Rouen who had pursued noble debtors on board. It seems likely that his sheep and goatskin clothes (the off cuts of his trade) kept him warm enough as he lay on a piece of fractured mast.

This eyewitness to history saw the end of the tragedy: the prince being bundled into the one small boat on the White Ship by his bodyguards. But his half-sister, the Countess of Perche, called in terror for William to come back to save her. He ordered the rowing boat to turn round, but it disappeared under the weight of drowning passengers scrambling aboard for life.

The king lost so many dear to him that night. He was felled by the news, bellowing in agony. He had to face up to personal devastation, but also dynastic disaster. Although he remarried two months later, his young bride, Adeliza of Louvain, bore him no children at all.

Henry ordered his leading churchmen and politicians to swear allegiance to his one remaining legitimate child, Matilda. Although they paid lip service to her right to succession, it was not to be. When the king died after gorging himself on rich food in 1135, the full consequence of William Ætheling’s death became clear: Henry’s likeable but unintelligent nephew, Stephen of Blois, rushed to seize the throne. Soon, he faltered, giving fresh impetus to Matilda’s claim. The chaos turned to anarchy so severe that it in turn led to the end of Norman rule.

No wonder the 12th century historian William of Malmesbury wrote of the White Ship, ‘No Ship that ever sailed brought England such disaster.’ I believe that still to be the case today. 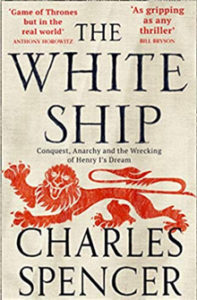 Charles Spencer is the author of seven books including Blenheim: Battle for Europe and Killers of the King: The Men Who Dared to Execute Charles I. The White Ship: Conquest, Anarchy and the Wrecking of Henry I’s Dream, is his latest and is out in paperback now. Charles was interviewed as part of the Aspects of History Summer Festival, available on YouTube. 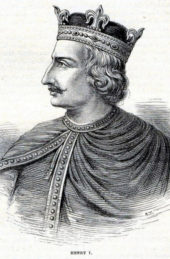 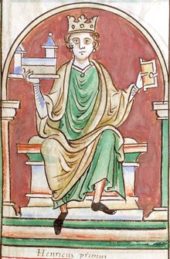 Henry I: The man who was never meant to be king

The Story behind the White Ship