A siege at Basing House in Hampshire in October 1645 was a microcosm of the wider Civil War brutality. 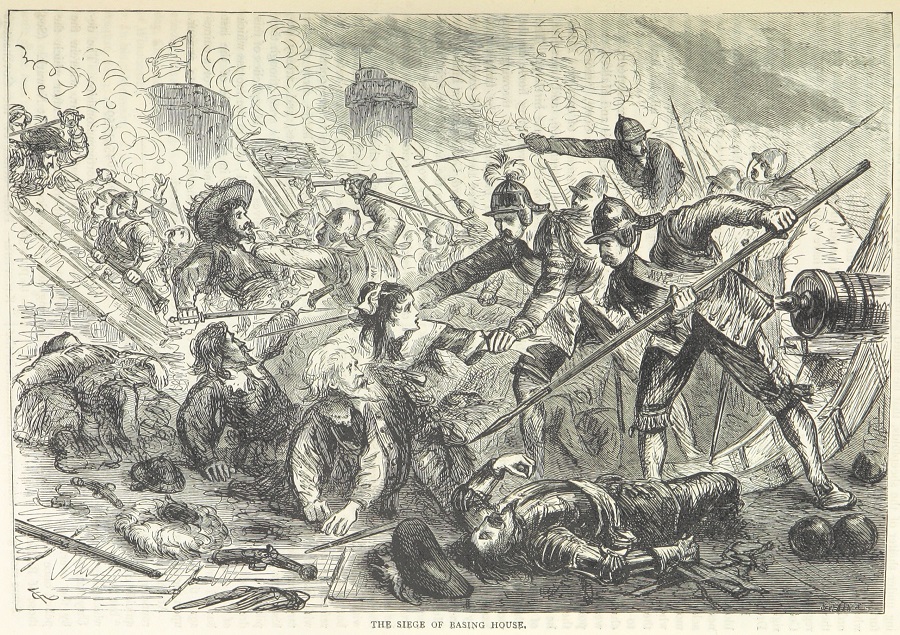 In 1786, two Americans walked a battlefield. They were in the heartlands of England, not far from Shakespeare country. As they circuited the site of the battle of Worcester, where in 1651 Charles I’s son was put to flight, John Adams and Thomas Jefferson, the future second and third presidents of the United States, had questions for the locals. None seemed capable of or even interested in answering them. Adams couldn’t believe it. ‘Do Englishmen so soon forget the ground where Liberty was fought for?’ he asked. ‘Tell your neighbours and your children that this is holy ground, much holier than that on which your churches stand.’ 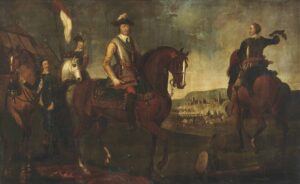 Cromwell at the Battle of Worcester

More than two centuries on and there is still some bafflement, and occasional outrage, at the Englishman’s unfamiliarity with his nation’s brightest, and darkest, hours. This despite the civil wars creating fault lines that are still evident in the way we divide and vote. This despite the seventeenth century being one of the most formative periods in British and Irish history. Everything seemed to expand in this moment, from the population and marketplace to the natural world and the very heavens. With telescopes and microscopes, people could see further and closer than ever before. There were exciting discoveries and terrible new prospects. Merchants grabbed lands and forced enslaved Africans to work them. England’s position in the world, in Europe and in its own archipelago was transformed. The public became more literate, litigious and opinionated. There were culture wars and the first newspapers. Preachers and politicians fashioned themselves accordingly. Plague stalked the earth. There was a growing feeling that the end days were coming and that an apocalyptic showdown between the forces of darkness and light was imminent. It was a terrifying, electrifying time.

People called it the ‘Iron Century’. We now know that they were living through the most intense phase of the Little Ice Age, a period of climatic cooling that saw some of the coldest weather on record. This meant long winters and wet summers, failed crops and food shortage. There was political turbulence across the globe – the Thirty Years War in Europe, rebellion in Russia, sultanicide in the Ottoman empire, civil war in the Mughal empire and violent regime change in China. ‘Monstrous things have happened,’ wrote the Welshman James Howell, ‘it seems the whole world is off the hinges.’

It was hoped, at first, that Britain might escape the convulsions. ‘God be thanked,’ preached Matthew Griffith at St Paul’s Cathedral on 2 October 1642, ‘we have lived in peace and plenty. God be thanked, we never yet knew what it is to hear the murdering pieces about our ears.’ He implored his listeners to look at the rest of the world in turmoil, ‘whilst this our Britain (like the centre) stood unmoved’.

But Britain was not, it turned out, exceptional, and by the end of the month, the preacher was in prison and the battle of Edgehill had reaped the first ghastly harvest of a civil war that would claim a greater proportion of British lives than the First World War. The most notorious casualty was King Charles I, executed at the Banqueting House in Whitehall on 30 January 1649. The monarchy and the House of Lords were abolished and so was the Church of England in structure and liturgy. In came a republic, a Directory for Public Worship, two written constitutions and Oliver Cromwell.

In 1660, the son of the dead king returned from exile as Charles II. He restored the lords and the bishops (if not the status quo ante bellum). An Act of Oblivion offered a general pardon for offences committed during the ‘distractions’, and people were required to lacquer their pain in a coat of amnesia. Words in ‘any way tending to revive the memory of the late differences’ were banned.

Yet words – and memories – could not be effaced. They remain in the archives, unvarnished and raw. In the Essex Record Office, the petition of Jeremiah Maye, a disabled parliamentarian soldier, explains that he and his family need rescuing from ‘the hungry jaws of want’. In a petition in the Berkshire Record Office, a royalist widow describes seeing her house ‘violently torn’ and torched ‘by the cruel soldiers’. Amongst the papers of the Committee for Advance of Money is an account of the torture of a parliamentarian prisoner who was ‘burnt with lighted matches’ in Aberystwyth Castle.

Other documents are less explicit, but equally poignant. A little love poem flits between the pages of an army account book from royalist Oxford – ‘What thing / is love is love / . . . It is a pretty thing’. It has been crossed out. In the Hampshire Archives, a royalist protection order is striped with damp, presumably because its frightened recipient hid it under his floorboards (see plates). In the Leeds branch of the West Yorkshire Archives, a tatty notebook catalogues the contents of a garden. Old words tumble out of it: Kentish Codlings, Granado Gilliflower, Melancholy Monkshood. One page is devoted to ‘my best tulips’. When war came, the gardener flipped his book over and began new lists. One is headed ‘The Postures of the Musket’. Out went seeds, bulbs and stakes. In came powder, shot and scouring stick. A world was turned upside down.

The Siege of Loyalty House is an attempt to recover the shock of that experience and to look upon the face of the war through the story of one particularly dramatic episode. The siege of Basing House in Hampshire belongs to the first civil war, 1642–6, which ended with Charles I in custody. The house was said to be the largest private mansion in England. It rose above the banks of the River Loddon and seemed perpetually enveloped in mist. It was known as ‘Loyalty House’, after the motto ‘Aimez Loyauté’ (‘Love Loyalty’) of its owner, the Marquess of Winchester, and it had strategic importance because it commanded the main road between London and the west.

It mattered even more symbolically. To its enemies, Basing House was a microcosm of Stuart degeneracy, personified by its Catholic owner, his half-Irish marchioness and their most famous guest, Inigo Jones, the architect who had done so much to exalt the dynasty. It hardly mattered that Jones and many others in the house did not share the Winchesters’ faith. In the press and pulpits, Basing House was a bastion of ‘popery’, ‘a limb of Babylon’, ‘a nest of the vilest vermin in all the kingdom’. It was here, announced a parliamentarian preacher, that ‘religion and laws and liberties and the very being of our English nation lie at stake’.

For over two years, Parliament’s forces tried to shoot, shell, starve and smoke the royalist soldiers and civilians out of their stronghold. Things happened, we are told, ‘which the nature of man doth tremble at’, things that anticipated not only Oliver Cromwell’s sectarian fury in Ireland, but also, in the rudimentary use of chemical warfare, the fumes in Flanders fields. ‘You must remember what they were,’ reported a parliamentarian newsbook, ‘they were most of them papists; therefore our muskets and our swords did show but little compassion.’ The royalists grew equally ruthless. In their struggle to survive, they turned on their neighbours and they turned on themselves.

If Basing House offers a lesson in the descent of man into savagery, it can also point to his ascent. For this was a place of beauty and wonder too. It saw heroic deeds, miraculous escapes and even a wedding. It was witness to the power of love – from the sacrifice of a daughter for her father to the love of life that provides hope when all else is lost. Basing House acquired an aura. People began to wonder if it would ever fall; if, indeed, God might not want it to fall.

Because the ruins are so evocative, and the archaeology so rich (with the added allure of hidden treasure), and because the mists still come to haze time and space, Basing House is, for me, a numinous place. It captures the push and pull of the past and the transience of human life, ‘the poetry of history’, as G. M. Trevelyan called it: ‘the quasi-miraculous fact that once, on this earth, once, on this familiar spot of ground, walked other men and women, as actual as we are today, thinking their own thoughts, swayed by their own passions, but now all gone, one generation vanishing after another, gone as utterly as we ourselves shall shortly be gone, like ghost at cock-crow’.

A stirred imagination is an impetus that need not adulterate the facts, nor denote partisanship. This story is told mainly from inside the house looking out, but I have also tried to breach the minds of the besiegers and the neighbours who were caught in the crossfire. By dint of the trades and skills of those who came to Basing House, a sort of garrison of all the talents, we can also look out beyond the lines onto other vistas – artistic, scientific, commercial – to see why this was such a dynamic age.

I hope that readers who came for the fighting will stay for the long build-up and the lulls (an authentic siege experience, after all), just as I hope that those who have little interest in military history will better appreciate its value. There is something about war, particularly civil war, and most especially the conditions of a siege, that brings out the best and worst of humanity. By looking at it in detail, it may even be possible to see a world in a grain of sand.

Above all, and quite simply, I hope that the story that follows might make the civil war seem more vital: that it might enable us to follow the drama on the ground, so to speak, as chaotic and bewildering as the experience often was, and that it might restore life to some of the players. The defenders of Basing House were not a monochrome Cavalier elite. They included an apothecary, a print-seller and a scrivener, a merchant, an engraver and a vintner, an actor and a clergyman and his brave young daughters, who were all thrust upon the stage in one theatre in an especially brutish century.

‘All England should come in pilgrimage to this hill once a year,’ John Adams declared at Worcester. Other hills provide different views of Liberty. Our story begins on a city hill, fifty miles north-east of Basing House, where the bells of Old Bailey are calling. 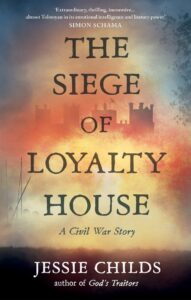 Jessie Childs is the author of The Siege of Loyalty House: A Civil War Story, which is out now and published by Bodley Head.

Aspects of History Issue 9 is out now. 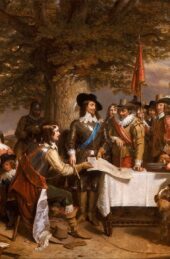 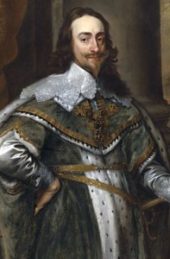 Before the Civil War