Home » Articles » The Irminsul – World Tree of the Saxons

The destruction of a sacred tree has inspired a new series of novels set during the Viking Age. 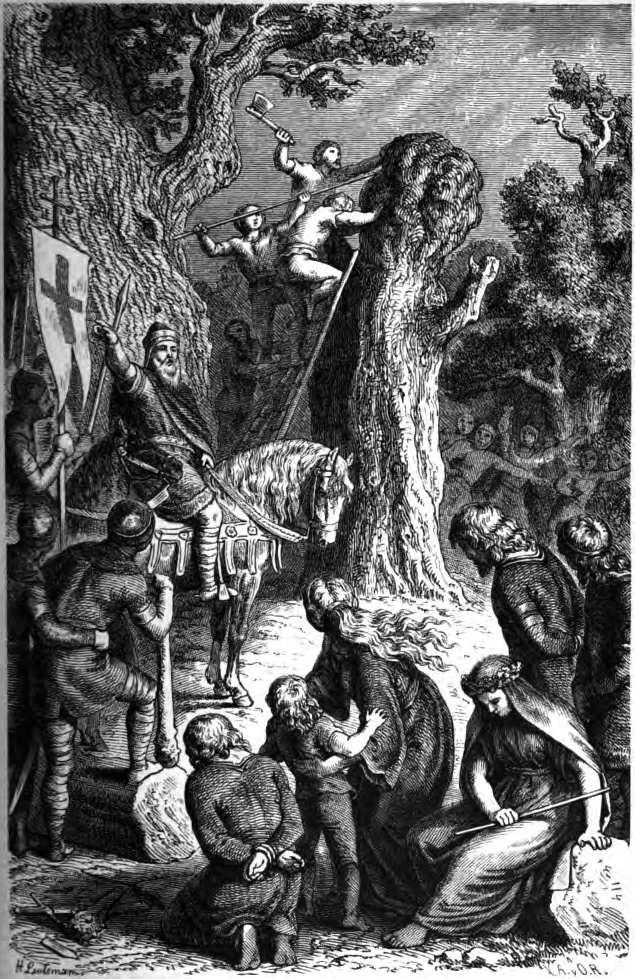 The destruction of the Irminsul by Charlemagne, by Heinrich Leutemann 1882.

The destruction of a sacred tree has inspired a new series of novels set during the Viking Age.

Today Obermarsberg is a sleepy suburb of a leafy town called Marsburg (pop. 20,000) in North-Rhine/Westphalia. However, this ordinary German backwater possesses one curious geological feature: it was built on an oval, sheer-side plateau that rises 130m above the valley of the River Diemel. Obermarsberg is now in Germany’s heartland; 1,250 years ago it was the frontier of civilisation: the site of an Iron Age fort called Eresburg on the border between two warring peoples: Christian Franks and pagan Saxons.

Eresburg, which features prominently in my novel The Last Berserker, as the Groves of Eresburg, was (probably) the site of the Irminsul, the World Tree of the Saxons. This is the equivalent of the Yggdrasil of Norse mythology, the vast ash that runs like an axel through the nine worlds of the universe, including our domain – the Middle-Realm, with its roots reaching down to the goddess Hel’s freezing afterlife and the upper branches touching heaven.

The World Tree is an almost universal mythic concept found in parts of Eastern Europe, in Siberia, Iran, India, and North America (symbolised as totem poles). It even appears in the Bible, as the Tree of Knowledge, from which Eve so disastrously plucked the forbidden fruit. Yggdrasil also has an evil serpent coiled around it. It seems that the 8th century Saxons worshipped the actual living Irminsul – or possibly a representation of this tree as a vast stone or wooden pillar. A church in Obermarsberg dedicated to St Peter and St Paul occupies what is believed to be site of the Saxons’ most holy object.

In my novel, the two young heroes travel from the Dane-Mark south into Saxony heading for the Groves of Eresburg, which is the site of a massive oak tree in the centre of a priest-tended sacred shrine. This is the location of the Fyr Skola, an institution that offers them military training, spiritual tests and ordeals and the chance to learn how to summon their gandir, animal spirits, which can transform them into legendary berserkers. These frenzied fighters, beloved of Odin, are mentioned in the surviving Viking sagas.

Here is a description from the 13th century Ynglingasaga, written in Old Norse by the Icelandic poet Snorri Sturluson:  “. . . his [Odin’s] men went [into battle] without mail coats and were as wild as dogs or wolves. The bit their shields, were as strong as bears or bulls; they killed people, but they themselves were hurt by neither fire nor iron. This is called going berserk.” Translation by Professor Neil Price, author of The Viking Way: Magic and Mind in Late Iron Age Scandinavia, and The Children of Ash and Elm: A History of the Vikings)

Berserkers were deeply respected – and feared – by the pagans of Saxony and the Norse cultures. In my novel, berserkers are the elite of a warrior society and draw their spiritual strength from the holy Irminsul in the Groves of Eresburg. So it was unsurprising that Charlemagne, the newly crowned King of the Franks, after years of bloody provocation on the Saxon border and the murder of several Christian missionaries sent to convert his heathen neighbours, decided to strike at the very heart of his enemies’ religious faith.

In AD772, Charlemagne sent an army into Saxony. The Annales regni Francorum, a chronicle written by Frankish monks, describes the attack:

“Charles, after devastating the surrounding territory with fire and sword . . . captured the Eresburg, reached the Ermensul, and destroyed that shrine . . . ”

Charlemagne captured Eresburg and (probably) destroyed the Irminsul but that did not end Saxon resistance to the future Holy Roman Emperor. The Saxons fought off the Franks for thirty bloody years before succumbing to Christian hegemony. And the history of this heroic pagan resistance against overwhelming odds will inform the future novels in my Fire Born series.

The Last Berserker, published by Canelo, is the latest novel from Angus Donald, and is Volume One in the new series, Fire Born. Angus is always happy to chat to his readers on Twitter or Facebook, or at his website.

You can read Angus’ interview with Theodore Brun here, and our review of The Last Berserker here.

The destruction of the Irminsul by Charlemagne, by Heinrich Leutemann 1882.