Richard III's body was discovered under a Leicester car park. But what of his close friend Viscount Lovell - where is he buried?

I’m drawn to writing about people who disappear. Perhaps it’s because as a historical novelist I look for the gaps in the historical record that can be filled by the imagination. One such historical figure is Francis, Viscount Lovell, close friend and advisor to King Richard III who vanished after the Battle of Stoke Field in 1487. History abhors a vacuum, it seems, and in an echo of the speculation over whether Richard killed his nephews, the “princes in the tower,” there have also been many theories over the eventual fate of Francis Lovell.

Francis, by surname at least, is probably best known from the lampoon written by William Collingbourne in 1484: “The Catte, the Ratte and Lovell our dogge rulyth all Englande under a hogge,” which mocked courtiers Lovell, Catesby, Ratcliffe and King Richard himself through reference to their heraldic devices. Collingbourne had reason to dislike Francis since the stewardship of the Wiltshire estates of Cicely Neville, Duchess of York, had been taken from him and awarded to Francis that year.

Born in 1456, Francis Lovell became a ward of Richard Neville, 16th Earl of Warwick, at the age of about eight years old. This may well be where he first met Richard, then Duke of Gloucester, and formed the friendship that was to endure a lifetime. Francis married Anne FitzHugh, cousin to Anne Neville, Richard’s wife, cementing their alliance through family ties. He served under Richard in the expedition to Scotland in 1482 and when Richard took the throne in 1483, he became Chief Butler and later Lord Chamberlain. 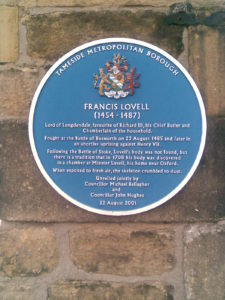 Francis Lovell is listed incorrectly as amongst the fallen at the Battle of Bosworth when in fact he survived and was involved in several further plots against Henry VII. These culminated in the Battle of Stoke Field on June 16th 1487 where the Yorkist rebels were defeated.

Polydore Vergil is the only chronicler to suggest that Francis Lovell died in battle, whilst Edward Hall and Raphael Holinshed both report that he died after fleeing the battlefield. However there is no record of him as a casualty of Stoke Field or that he died shortly after. This absence of record has led to a number of theories springing up as to Francis’ fate. The first of these is that he fled to Minster Lovell where he went into hiding. This story was given fresh impetus in 1708 when workmen allegedly discovered the skeleton of a man’s body in a secret chamber at Minster Lovell Hall. This skeleton was said to have crumbled to dust as soon as the air entered the secret chamber. However this picturesque legend is unlikely to be true; Minster Lovell Hall was granted to the King’s uncle Jasper Tudor in 1486 and as such would not have made the most convenient hiding place for the king’s enemy.

An alternative theory is that Viscount Lovell fled the battlefield for his mother’s castle at Stoke Bardolph nearby where he succumbed to his injuries and was buried at Gedling Church. The discovery in the 19th century of a tomb with an effigy dated to the late 15th century, which was said to be of a knight who died at Stoke Field, lends credence to this particular tale. It’s intriguing to consider that Francis might have been buried there anonymously to save him the traitor’s fate of disinterment. However it wouldn’t have taken much of a leap for Henry’s agents to determine that the burial was Francis’s. Perhaps Henry knew and was content to let his enemy lie.

However, letters from Anne, Lovell’s mother, to Sir John Paston, which can be dated to 1488, suggest that at this time, Anne herself is searching for news of Francis’ whereabouts, whether in Scotland or further afield. Certainly Francis’s name is included on the safe conduct issued by King James IV of Scotland to the rebels in June 1488 but there is no record that he ever went there. A witness who claimed to have spoken to him there in 1491, in the company of fellow rebel Thomas Broughton, later withdrew his testimony.

Some historians speculate that Viscount Lovell escaped to Burgundy or even the Holy Roman Empire, ending his days under a false identity. There is nothing in any surviving documentation to support this and it leaves the question of his final resting place open, a mystery like so many others from that era.

Nicola Cornick is a bestselling author. Her latest novel is The Last Daughter taking the reader to the Wars of the Roses. 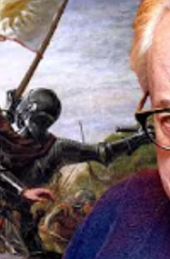 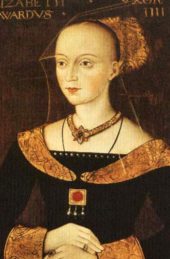 The York Princesses and Their Woodville Inheritance