Dismissal of the younger generation, recently labelled avocado munching ‘snowflakes’, is not a new phenomenon.

HRH Princess Elizabeth during the war.
Home » Articles » Do the Greatest Deserve Their Sobriquet?

‘The average young man of today aged something under thirty, whether he be a social butterfly or a junior clerk, is a stupid, conceited creature,’ thundered the Daily Mirror in its editorial. ‘Few men are much good until they are thirty.’ Guidance from the Greatest

The year was July 1912, and the Mirror’s irascible analysis was endorsed by millions of middle-aged Victorians who believed that the youth of today was a pale imitation of their own resolute generation.

Within six years, hundreds of thousands of these ‘clerks and butterflies’ had been laid to waste on the Western Front. Those that survived inherited their parents’ jaundiced view of youth as they moved into middle age; where once they had been called ‘social butterflies’ they described their children as ‘lounge lizards’, a generation of young men and women who were a pale imitation of themselves.

In 1933, the Oxford Union Society passed the motion in a debate that ‘This House will under no circumstances fight for its King and country’. The Times bemoaned the ‘universal decadence’ of the students who had succumbed to the anti-war literature pumped out in the previous decade. God help us, muttered their parents, if our offspring should be required to fight a war like we did.

Public figures of a certain age were not shy in stating their view that Britain’s young were in crisis.

In 1936, the wartime Prime Minister David Lloyd George described the country’s youth as ‘a soft, slack and self-indulgent generation’. The following year, the Reverend A. Wellesley-Orr gave the address at the annual Footballers’ Service and called for a return of the Victorian ‘Muscular Christianity’, as only that ‘would bring strength into a soft generation that has got too many lounge lizards, film fans, and effeminate young men’.

Some of the ‘soft generation’ agreed that they were a sorry bunch. Writing an op-ed in the Belfast Telegraph in 1937 under the nom de plume, Max Winchester, a 23-year-old stockbroker said:

‘Looking at present-day life, my chief impression is best summed up in words more usually attributed to the old and crusty: Britain is going to the dogs. So much is evidenced by the degeneracy of her people. If my generation does not pull itself together in the near future our civilisation will end in complete disaster.’ 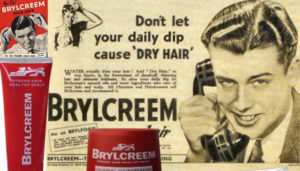 Brylcreem. The 1930s equivalent of avocados?

Max blamed the degeneracy on the ‘cheap pleasure’ afforded by cinemas, jazz and Brylcreem. As a consequence, his generation had become feckless and foppish, and he blamed the parents as much as the celebrity culture that had been imported from America. ‘Millions of children are brought up in cotton wool,’ Max complained.

‘They are pampered and petted by over-indulgent parents; they grow up undisciplined and untrained for the parts they have to play as men and women in a hard world. They turn into defeatists and pacifists, their outlook on life is warped by self-pity and the spirit of surrender…they are afraid to look life in the face, so they try to bury their heads in amusement. In a word, this is an effeminate and spineless generation.’

But if the youth of the 1930s were indeed ‘snowflakes’ wasn’t the neuroses of their elders and betters to blame? It was they who, in 1916, had launched a ‘Safety First’ initiative, conceived to reduce accidents in the wartime blackout. But after the war, the National Safety First Association made it its mission to reduce the risk in every facet of British everyday life. It ran a promotional campaign in the regional and national press, publishing pearls of safety wisdom such as: ‘Safety First Slogan: When cycling look ahead’ and ‘Safety First Slogan: Stop, look right and left before crossing the road.’

There was a backlash in some quarters. Oliver Lusher, chairman of the Governors at a school in Bury St Edmunds, told pupils at the annual prize giving in 1933:

‘It is all very well to do all we can to avoid running into danger…but let us remember that if we want stronger muscles, a steadier nerve, and keener intellect we must take risks. Adventure, after all, should be the salt of life to you young people.’

The novelist Daphne Du Maurier rubbished ‘Safety First’ as a ‘dismal slogan’, and not one that had put the Great into Britain. ‘It is hard to imagine Drake and Raleigh and Sir Philip Sidney talking about ‘Safety First’,’ she wrote. ‘There was a certain selfless gallantry about them that makes our own caution a poor thing in comparison.’

The decline of the British youth in the 1930s as depicted by the press was a generalisation and a distorted one at that. Not for the last time the British commentariat was guilty of analysing the country through the prism of the middle-class. Working class boys and girls didn’t have the time nor the means to be lounge lizards; they could barely afford a pair of boots, far less a pot of Brylcreem.

Arthur Thomson was born in west London in 1920 and experienced ‘a very poor upbringing’. On occasion he didn’t go to school because he had no shoes; at other times he went in his dad’s slippers if he was asleep after the night shift. Thomson left school at 13 and went to work in Covent Garden fruit market, lugging boxes of apples and bags of potatoes for 12 hours a day.

By the time Thomson was 20 he had the strength and stamina to pass selection for the commandos, and he later served in the Special Air Service for three years. So did George Daniels who, in the autumn of 1943, was chased through the Italian countryside by a company of Austrian Mountain Troops after a sabotage mission. Growing up in Derby, Daniels had spent his Saturday evenings delivering the sports edition of the local newspaper to outlying villages, walking and running more than 15 miles in a pair of hob-nailed boots with a heavy bag over his shoulder. He had no trouble keeping one step ahead of his Austrian pursuers.

Thomson and Daniels are now dead, and few of their generation remain. One who does is Michael Carr, who turned 100 in October. Nicknamed ‘Lofty’ on account of his 6ft 4in stature, Carr was a navigator in the Long Range Desert Group, joining the unit in January 1941 and serving with them until his capture in September 1942. In many ways, Carr is typical of his generation. His father had served in the Great War and bequeathed to his son a robust cynicism about the myth of ‘King and Country’.

The ‘Social Butterflies’ of 1912 had floated off to war two years later in the belief it would be over by Christmas. They believed, too, in deference, in the innate superiority of the ruling class, a faith that was destroyed in the carnage of Ypres and the Somme.

Their children were raised without this blind obedience, disabused of it by their parents and also their schoolteachers, many of whom had served in the trenches. Intellectually, they were more independent than their parents and more willing to challenge established orthodoxies, hence the Oxford Union vote in 1933.

Nonetheless, six years later this generation went off to war and the women they left behind endured years of terrifying air raids from the Luftwaffe, the first time that the home front in Britain was transformed into a major battleground. 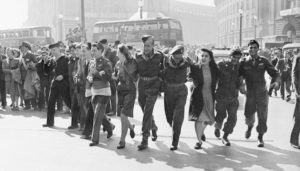 Civilians and servicemen on VJ day in August 1945

By their courage, stoicism and indomitability, this generation proved themselves the equals of their parents’ generation. In my view, they were superior, certainly intellectually, worthy of their mantle of the ‘Greatest Generation’.

They went off to war in September 1939 in the knowledge that it wouldn’t be over by Christmas; they knew, too, of the old lie, Dulce et Decorum Est. There was no Rupert Brooke in World War Two. No one wanted to die in a corner of a foreign field; nonetheless this generation ‘did their bit’, and more, forced to do so by the weak appeasement of the political class during the 1930s.

Fortunately, they were not so supine. World War Two was a clear fight between good and evil and the Greatest Generation were ardent in their determination to defeat fascism. ‘We were disillusioned and spoiled,’ reflected Richard Hillary, a student at Oxford in the late 1930s before joining the RAF and becoming a Spitfire pilot. ‘The Press referred to us as the Lost Generation and we were not displeased. Superficially we were selfish and egocentric without any Holy Grail in which we could lose ourselves. The war provided it.’

Hillary wrote those words in 1942, as he recovered from serious burns suffered during a dogfight. Six months later, he was killed shortly after returning to operational flying. He concluded his memoir, The Last Enemy, by explaining he had written the book to honour those of his generation who were dead and those still living, ‘who would go fighting until the ideals for which their comrades had died were stamped for ever on the future of civilisations.’

Gavin Mortimer is a bestselling writer, historian and TV consultant whose versatile non-fiction books have been published in Britain and the USA. Gavin is the leading authority on World War Two special forces having interviewed over 100 veterans. His latest book is Guidance from the Greatest: What the World War Two Generation Can Teach Us About How We Live Our Lives. 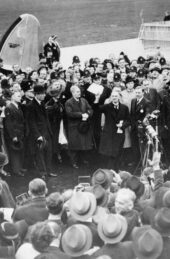