The Dardanelles Conspiracy, by Alan Bardos

The world of espionage during the Gallipoli campaign. 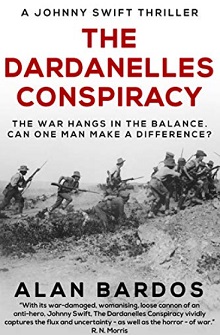 The Dardanelles Conspiracy, by Alan Bardos

The world of espionage during the Gallipoli campaign.

The 1915-16 Gallipoli Campaign is one of the most infamous of theatres of the First World War. The loss both in terms of casualties and pride was unparalleled for Allied forces. The campaign attempted to take the Dardanelles Straits by ship, and through them, reach Constantinople. And this is where Alan Bardos’s compelling protagonist Johnny Swift returns – we follow Swift from disgrace at the Western Front to his role as spy-turned-diplomat in Constantinople, and eventually into the heart of the action in the Dardanelles Straits themselves. Bardos weaves together the various strands of his plot to ensure that the many characters we follow are subtly manoeuvered around Europe to arrive at the climactic battle scene, all engineered to allow us to experience the first naval and ground troop action in the Dardanelles and Gallipoli. In doing so, Bardos achieves a cinematic quality to his narrative, panning across both sides of the battle and at every station from Admiral in command-post to civilian seaman on an ill-made trawler sweeping the Strait for mines.

Johnny Swift is dispatched on a diplomatic mission based on a real-life incident – in 1915, the British did in fact attempt to bribe Turkey to leave the war, but the fate of Constantinople, destined for Russian hands, made this a tall order. Bardos places Swift in the centre of these negotiations, and artfully constructs the plot to show the arc from the frontlines to tense diplomacy and back, as the inevitability of the battle becomes evident. Bardos never lets us forget that every character, just like every section in every branch of the military, has a purpose in his narrative, and through them we view the First World War from every angle. He intersperses his fictional characters with names like Winston Churchill and Talat Pasha, First World War players who are drawn as convincingly as their invented counterparts Sir George Symth and Laszlo Breitner, who return as part of the Swift roster.

Perhaps the greatest achievement of Bardos’ book is to make the gambles of diplomacy seem as high-stakes as the realities of war, conveying the critical global nature of the diplomatic mission alongside huge personal risk as the vivid narration follows its cast into battle. The striking and unexpected takeaway is in fact how much one is reminded of more recent conflicts in Vietnam and the War on Terror. History, particularly with the World Wars, has a tendency to sugar-coat our understanding of them as a tragedy endured for the greater good. It is only with more recent conflicts that we have begun to think about the extent to which such tragedies were unnecessary. Bardos conveys tragedy from all angles – not only through British, German and Austro-Hungarian characters – but also by revealing the many chances those in power had to end the campaign. The initial action in the Dardanelles Straits was the start of a campaign that only begins in this book – and was to last a further eight months with over a quarter of a million casualties sustained on each side. Bardos shows us a different side of Gallipoli – a failed attempt at using diplomacy for peace followed by a series of missed opportunities to prevent further fighting. It is at times an uncomfortable picture of the famed British Royal Navy, one of poor communication and unpreparedness which forces us to see the events in the Dardanelles Strait on a human level. It is when we see leaders putting honour over lives to go into battle, and the chain of command over evidence to remain there, that we are forced to challenge our perceptions. Putting aside the obvious enjoyment derived from a dramatic story, the cautionary undercurrent of Bardos’ novel reframes Gallipoli as an avoidable tragedy.

Alan Bardos is the author of the Johnny Swift series of novels, published by Sharpe Books. 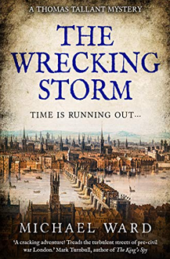 The Wrecking Storm, by Michael Ward 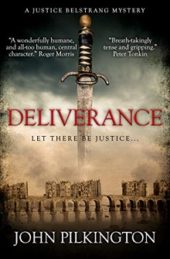 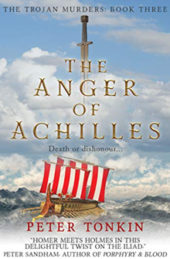 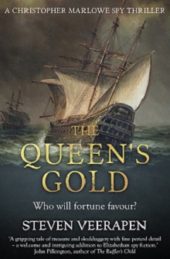 The Queen’s Gold, by Steven Veerapen