The final in the trilogy set during Operation Pedestal

Indomitable is the third title in Matthew Willis’ Fortress of Malta series and follows on from the events of the previous two books, Harpoon and Bastion. This time the protagonist of the series, Clydesdale, returns to Malta in Operation Pedestal, a vital convoy mission that could save Malta as well as his lover, Liena. For two years between 1940 to 1942, the Axis powers besieged the fortress island of Malta. By the second year of the siege, crucial food and fuel supplies were running dangerously low. Since Malta acted as the focal point of British operations in the Mediterranean, it was vital that it did not fall. Willis recalls the attempt of the British Navy to resupply the island. With a convoy of 50 ships, including four aircraft carriers, the operation represented one of the most significant naval actions of the Second World War for the British. Within this pivotal historic moment, Willis weaves an exhilarating story of the fictional Edmund Clydesdale seamlessly into the real operation.

Clydesdale continues his career as a Navy Hurricane pilot on board HMS Indomitable, an Illustrious-class aircraft carrier. Repeatedly taking to the skies in his updated, but still outclassed fighter, flying to protect the fleet below and secure its arrival in Malta. Against waves of German and Italian fighters, Clydesdale struggles to keep his squadron in the air, as casualties begin to mount, and passions take over as his fellow airmen engage with the enemy. Alongside the battle in the sky, Clydesdale battles with his own inner demons. Believing his acclaim to be ill-deserved and potentially ruinous to his career and the reputation of the Navy’s air wings, only by confessing can he clear his conscience.

Willis excels in conveying the constant stress of life at sea and in the air. The possibility of being struck by a torpedo, bombed, or shot down at any moment is combined with Clydesdale’s paranoia over his unearned position and his fear of losing Liena. When ships are inevitably struck and aircraft shot down, Willis lends an almost cinematic quality to his writing, conveying in vivid detail the human and machine cost of the conflict. It is during the second half of the novella that this graphic imagery is demonstrated most keenly. From the get-go, Willis masterfully builds tension as the fleet moves from the Atlantic through the Straits of Gibraltar and into a hostile Mediterranean, from the frying pan and into the fire.

The author’s research is clearly meticulous, and he is adept at integrating the technicalities of aviation and naval life with flowing, evocative prose. Details of the events, planes and ships are historically accurate and where some historical alterations have been made, the story remains true to the period. This authenticity is carried through to the characters – Clydesdale is not the fighter ace people believe him to be, he is flawed, often distracted and his skills fall short of his reputation, but that is what makes the story more engaging. With every battle, the reader can feel the all too real risks and dangers of fighting thousands of feet in the air. Individual heroics are left behind, and instead, a grittier, more authentic, and ultimately more plausible story is told. Indomitable is a fine piece of military fiction. The larger operation is told through the human actions of individuals, making such a large operation digestible and enjoyable. This is a must-read for anyone interested in Britain’s lesser-known Second World War theatres.

Will Jarvis is co-founder of the Infocus History website. 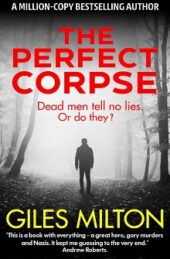