Roger Moorhouse is a historian and author, specialising in Nazi Germany, Central Europe and World War Two in Europe.  A fluent German speaker, he graduated from The School of Slavonic and East European Studies (SSEES), University of London, in 1995, and undertook post-graduate research at the Universities of Düsseldorf and Glasgow.

Roger was the co-author, with Professor Norman Davies, of Microcosm: Portrait of a Central European City in 2002, and has since written a number of books, including Killing Hitler (Cape, 2006), The Devils’ Alliance (Bodley Head/Basic Books, 2014) – on the subject of the Nazi-Soviet Pact – and the critically-acclaimed Berlin at War (Bodley Head/Basic Books, 2010), a social history of the German capital in World War Two, which was short-listed for the Hessel-Tiltman Prize in 2011.  His books have been published in over 20 languages.

His latest book First to Fight – which was published in the US as Poland 1939 – was shortlisted for both the Duke of Wellington Medal for Military History, and for the British Army’s Military Book of the Year award.

A regular lecturer and book reviewer for the national and specialist history press, Roger is a visiting professor at the College of Europe in Warsaw, and a fellow of the Royal Historical Society in London.  In 2020 he was awarded the Knight’s Cross of the Order of Merit of the Republic of Poland at the Polish Embassy in London.  He lives in Hertfordshire, UK. 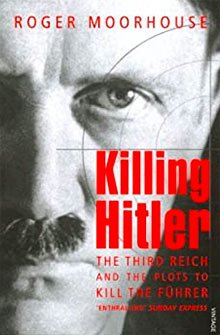 Hitler in the Wolfsschanze

“Hitler in the bunker” said would-be assassin Claus von Stauffenberg, “that’s the real Hitler”.  He was right.  Reinforced concrete seemed to follow Hitler like a Wagnerian leitmotiv; his Reich was not only the largest builder of bunkers in history, it also perfected its art constructing ...
Read More

Alfred Naujocks: The Man Who Started the Second World War

At eight o'clock on the evening of 31 August 1939, a team of six SS agents stormed a radio station in the German town of Gleiwitz, close to the Polish border.  They were led by Alfred Naujocks: a Sturmbannführer in the SS, and an agent of the SS intelligence corps; the Sicherheitsdienst (SD).  ...
Read More

What first attracted you to the period or periods you work in?It’s a whole host of intersecting fascinations, actually.  I started off studying Central European history in the aftermath of 1989, then gravitated to Germany – specifically Nazi Germany – which I still find fascinating.  My last two books –
Read More