The story of Stan Scott, the first man to reach Bénouville bridge.

They arrived in a blare of noise, a troop of D-Day commandos led by their flamboyant commander Simon Fraser, the 15th Lord Lovat. They had spent much of the morning fighting their way inland from Sword Beach. Now, they were nearing their goal: the rescue of John Howard and his beleaguered soldiers.

Howard’s men had been dropped into Normandy during the night and had succeeded in capturing Bénouville bridge (later renamed Pegasus) from the Germans. Their mission was to hold this strategically vital bridge for the next 12 hours, thereby blocking any German counter-attack against the Allied landing beaches. Howard had been promised that Lovat’s commandos would relieve them by noon.

Lord Lovat had long been a showman and the rescue of Howard’s exhausted troops was to be his greatest act. As he advanced towards the bridge, he ordered his trusty piper, Bill Millin, to blast out a tune on his bagpipes. His first words to John Howard were, ‘Sorry, we are two and a half minutes late’.

It was a greeting so understated, so very British, that it would become one of the most celebrated incidents of D-Day. It would also be one of the most memorable moments in The Longest Day, the 1962 Hollywood blockbuster whose historical veracity was given added credence by Lovat’s involvement as consultant.

But not everything unfolded in the fashion that Lovat recorded in his published memoirs, March Past. There was to be a lost narrative of that morning’s adventures – one every bit as exhilarating as the hitherto accepted version. Although Lovat was determined to be first to reach Bénouville bridge, he found himself racing against the very commandos he had trained – bullish young fighters who were determined to beat him to the finishing line.

Their astonishing story has been all but airbrushed from history, much to the chagrin of those involved. Yet the role of these teenage commandos in the Bénouville relief operation – and more widely in Operation Overlord – suggests that the Allied victory on D-Day owed as much to those frontline soldiers as it did to the commanders who would later publish their versions of the day’s action.

The story of the race to Bénouville bridge begins at 8.40am, when the commandos of the 1st Special Service Brigade landed under heavy fire on Sword Beach. Among these neglected heroes was Cliff Morris, a young soldier in 6 Commando who was to take part in the race to the bridge. He was appalled to see the corpses of those who had landed before him.

‘Bodies lay sprawled all over the beach, some with legs, arms and heads missing, the blood clotting in the sand. The moans and screams of those in agony blended with the shriek of bullets and whining of shells.’

Landing close to Morris was Lord Lovat himself, who famously strode ashore to the sound of Road to the Isles being played on the bagpipes. This would later become a symbol of British chutzpah, but not everyone was amused by Lovat’s showmanship. One sergeant screamed abuse at Lovat’s piper, Bill Millin. ‘What are you f—ing playing at, you mad bastard. You’re attracting all the German attention.’

Also landing alongside Lovat that morning was Stan ‘Scottie’ Scott, a 20-year-old bruiser from Tottenham in north London. Scott liked to be first in everything, especially in combat, and saw no reason why his No. 3 Troop could not be the first to reach Bénouville bridge. They were equipped with folding bicycles, which they lugged across the beach with their other equipment. Once on dry land, Stan Scott gathered a group of his hardest-hitters and began a headlong dash for the bridge.

Lovat’s commandos were highly competitive and all wanted to claim the prize of being first to Bénouville bridge. Cliff Morris and his comrades from 6 Commando reached the village of St Aubin-d’Arquenay, less than a mile from the bridge, at around 11am. They were joined soon after by Lord Lovat and his piper.

Morris was bemused by the inimitable fashion in which Lovat picked off an enemy sniper who was blocking their passage to the bridge. He fired his Scottish hunting rifle from a crouching position and scored a perfect hit. He then sent two of his men to fetch the body, rather as if they were bagging a trophy from the Highland moors.

At the bridge itself, John Howard and his embattled troops of the Ox and Bucks were under heavy fire from the surrounding German forces. Howard knew that his exhausted men couldn’t hold out for much longer. ‘I kept checking my watch constantly. I said to myself under my breath, “Come on lads – where are the bloody Commandos?”

The answer lay with Stan Scott and his five comrades in 3 Troop, who were engaged in a relentless drive towards the bridge. They reached the village of Bénouville, tantalisingly close to their goal, soon after 11am. They then pedalled furiously through the German-held village, dodging sniper fire as they enacted their very own version of the Tour de France. ‘There was five of us,’ recalled Scott, ‘a little detached party, like yellow jerseys going first.’

As they reached the farthest end of the village, they spotted the first of Howard’s beleaguered men – a lone British soldier slumped on the ground and clutching his shattered leg.

The encounter was very different from the one made famous by Lord Lovat. There was no skirl of the bagpipes and no apologies for being late. The paratrooper looked Scott up and down and said, ‘Where the f— have you been?’ Scott’s response was similarly profane, ‘B—-cks!’ He then ordered his comrades in 3 Troop to cycle at high speed towards the nearby bridge.

The final 75 yards were the most hazardous of all. ‘Rounds hitting from all sides, there was rounds ricocheting off and splatting and hitting.’ Four of Scott’s men survived the gunfire, but the fifth took a hit as he approached the bridge. ‘Campbell got clobbered. He got hit through the neck, fell down in one big lump, him, the bike and all that.’

Stan Scott’s thrust towards the bridge had been little short of remarkable, but it was witnessed by only a handful of men. This enabled Lord Lovat to steal his thunder when he arrived some 15 minutes later. As ever with his lordship, he was to create a visual scene that would be forever remembered by those who witnessed it. As his troop neared the bridge, he once again gave an order to Bill Millin. ‘Right piper,’ he said, ‘start the pipes again.’

The sight and noise of the main body of commandos gave renewed confidence to men who had feared they were doomed. They shouted, they cheered, they threw caution to the wind. ‘Now you Jerry bastards,’ they yelled, ‘you’ve got a real fight on your hands.’

For the rest of their lives, Scott and his men would feel as if they had been cheated of their rightful victory. They had been first to the bridge and they had won the race by dint of their bravado. ‘There was none of the bagpipe playing and cheering and all that crap,’ said Scott. There was simply relief that all but one of his little team had survived.

It was a small victory in a day of many bigger victories. But in being the first to reach Bénouville bridge – and leading from the front – Stan Scott and his men had played a crucial role in securing the eastern perimeter of the Allies’ D-Day landing zone.

This article first appeared in The Daily Telegraph in 2018. 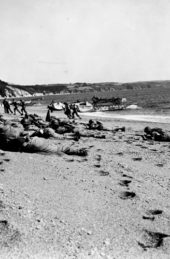 The Fight for Normandy’s Beaches 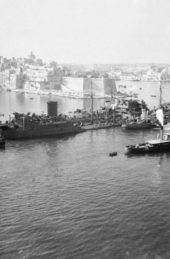